Michael Merchant, Stephen Biles and Dale Mott*    http://citybugs.tamu.edu/ E-211
White grubs are the larval stage of insects commonly known as May or June beetles (or June-bugs). Texas has almost 100 species of these beetles, most of which do not cause significant economic damage to crops or horticultural plantings. A few species, however, commonly damage turfgrass and other cultivated plants.
White grubs, sometimes referred to as grubworms, injure turf by feeding on roots and other underground plant parts. Damaged areas within lawns lose vigor and turn brown.
Managing White Grubs- Knowing when you have a problem.
White grub damage can be detected by the presence of irregular- shaped areas of weakened or dying grass in the lawn. Less severely damaged turf lacks vigor and is more vulnerable to invasion by weeds. Depending on location within the state, damage may appear any time between the months of June and October. Turfgrass damaged by white grubs has a reduced root system and is easily pulled from the soil.
Plants damaged by grubs will have weak growth and low plant vigor. Damaged turf grass will exhibit weak growth and vigor and have irregular patches of dying or dead grass. Most damage is evidenced in late summer and fall when grubs are ½” to 1” long and drought stresses are at their peak. Most lawns that struggle in spring had most of the damage done the previous fall. If you can tug on your grass and it peels up like a carpet then you have a severe grub infestation. To confirm whether you need to treat for grubs, examine several soil sections at least 3 to 4 inches across and 4 inches deep (sample sandy soils to greater depths). A good rule of thumb is to examine several soil plugs (up to one square foot per 1000 square feet of turf) from widely scattered parts of the lawn. Take care to include areas at the edges of suspected grub damage. Finding more than five white grubs per square foot justifies treatment, although some lawns with even higher numbers of grubs may show no damage.
Environmental Considerations:
Unnecessary insecticide applications sometimes create more problems than they solve. Pesticides can have detrimental effects on beneficial organisms, like earthworms, that help decompose thatch. Most insecticides do not discriminate between “good” and “bad” bugs and may kill beneficial insects that help control other pests. Also, unnecessary pesticide applications can increase the risk of insecticide resistance developing among white grub and other pest populations. For these reasons, routine, “preventative” insecticide applications to lawns for white grub control are not recommended. 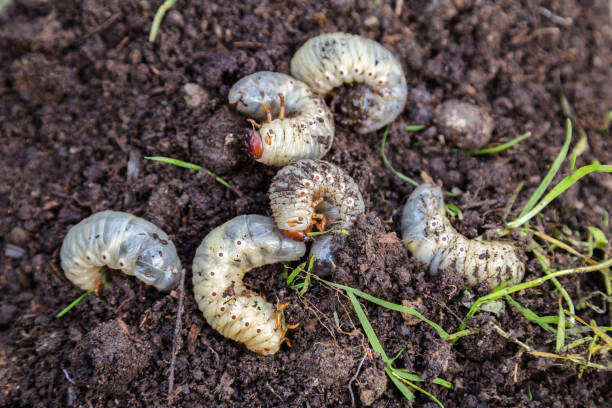